HONOLULU - The Hawaii Sports Officials Hall of Fame (HSOHOF) board of directors announced today asking the public and the officials associations to nominate worthy officials for their fourth class of inductees.  Induction ceremony is scheduled for September  2021.  Deadline for submission of nominations is December 31, 2020.

“We are extremely proud and excited to begin the process to recognize Hawaii’s outstanding sports officials,” said Cal Evans, President of the Hall of Fame. “Similar to the outstanding performances of athletes, we feel the contributions of sports officials deserves a worthy place in our culture. They sacrifice their time and energy away from their families to give back to the community from youth to collegiate level sports.”

HSOHOF was founded in 2017 to promote public awareness of officials and their value to sports by recognizing and honoring Hawaii sports officials who have demonstrated the highest level of achievement, character, leadership and skill while contributing to their local official’s association.​

Nominees shall meet the following criteria:
Nominees will be chosen by a 9-person selection committee comprised of members of the athletic community on both the interscholastic and collegiate levels, including retired and active officials and athletic administrators. 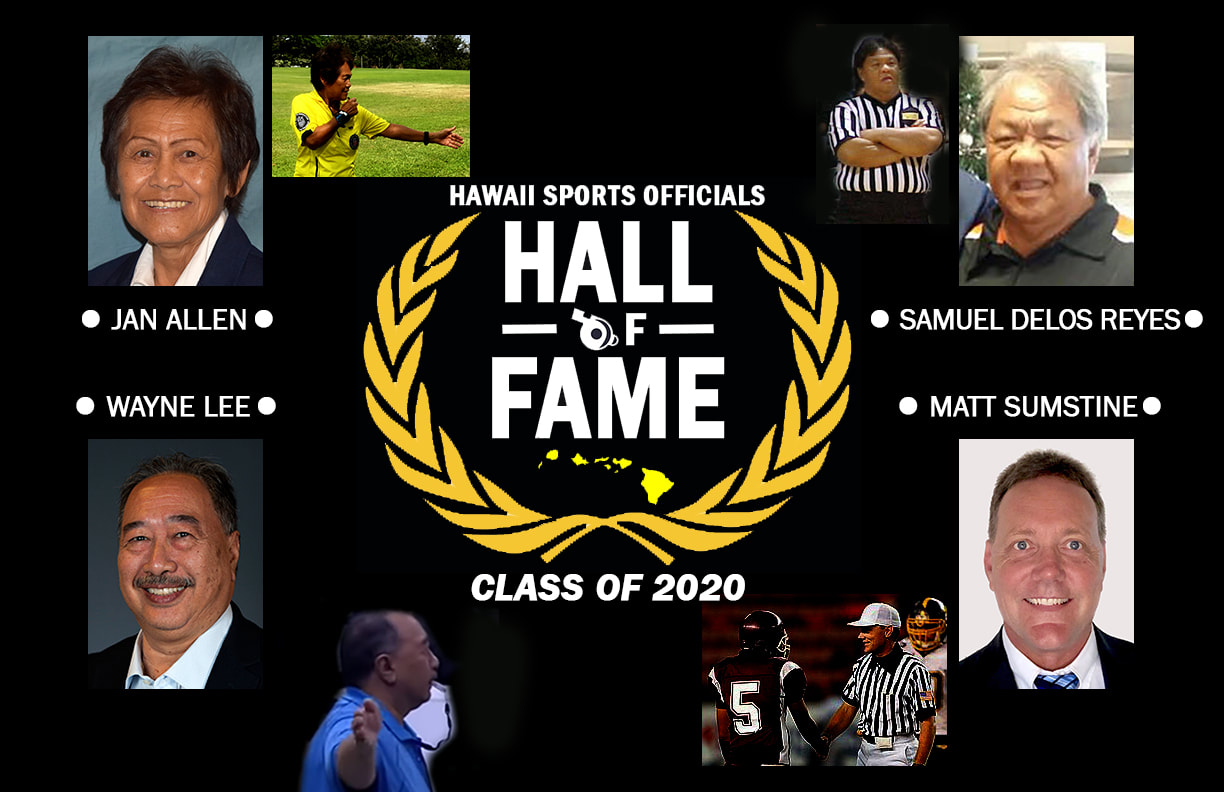 Hall of Fame Class of 2020 Names 4 New Members;
Ceremony postponed until Sept. 2021
HONOLULU (June 1, 2020) - The Hawaii Sports Officials Hall of Fame (HSOHOF) today named four new members for the Class of 2020. The list includes:
Due to the ongoing pandemic situation, the HSOHOF board announced the postponement of the 2020 induction ceremony until September 5, 2021.

“For health and safety reasons, the board felt it was prudent to delay induction of these four deserving inductees until 2021,” said HSOHOF president Cal Evans. “We will also begin the nomination process for 2021 and they along with these four will celebrate together.”

More about the inductees:

Jan Allen: Officiating the sport of soccer for over 46 years, Jan worked from youth leagues to adult semi-pro including the collegiate level. She is a member of the National Federation Soccer Rules Committee for the past five years and is a member of the Hawaii High School Athletic Association soccer tournament committee. She founded the Hawaii Scholastic Soccer Federation Referees Association and served as president.

Samuel Delos Reyes: A well-respected coach and athletic director, Delos Reyes was also among the top high school and collegiate basketball officials in Hawaii. He officiated 33 years with the Hawaii Basketball Officials Association and worked nine state title games. He was also hired by the Western Athletic Conference (men) and Big West Conference (women) to work collegiate games. In 1989 he became the commissioner and assignor of the Hawaii State Basketball Officials Association and ran that association for 15 years.

Wayne Lee: In a volleyball career that spans nearly 30 years, Wayne Lee is among the leaders in officiating as well as teaching and mentoring others. He currently works high school and collegiate matches and serves as the Aloha Region Officials chair and HHSAA volleyball officials coordinator. He worked with the University of Hawaii to establish that all officials be certified as USA Volleyball Junior or National referee status prior to becoming a collegiate official thus raising the bar in the perception of officials.

Matt Sumstine: A former on-field official, Matt Sumstine reached heights in officiating as Hawaii’s first official from Hawaii to serve as a National Football League replay official. Prior to this assignment, he worked as a Western Athletic, Big 12 and Mountain West Conference on field and replay official since 2005. He is also active as the HHSAA coordinator of officials and is the co-founder of many clinics throughout Hawaii. He often asked to serve as clinician in Texas and as far away as American Samoa.

This is the third class of inductees since the Hall of Fame was founded in 2017. 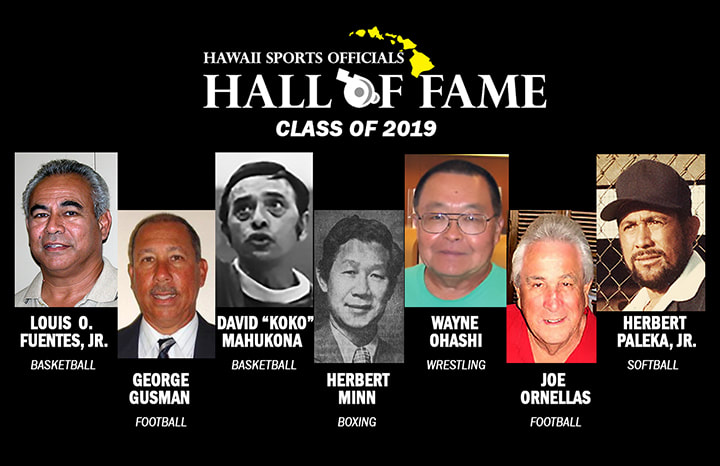 HONOLULU (April 28, 2019) - The Hawaii Sports Officials Hall of Fame announced the list of inductees for the Class of 2019. The list includes:

The seven inductees were selected based on the criteria of demonstrating the highest level of achievement, character, leadership, skill and commitment-to-officiating over a significant period of time.

Each inductee will be formally inducted at the annual recognition banquet on Sunday, September 8, 5 p.m. at the Ala Moana Hotel.  For banquet information, please call (808) 445-4277 or visit our web site at www.hawaiisportsofficialshalloffame.org.

More about the inductees:
Louis Fuentes: Over the past 50 years, Louis has been officiating youth and high school game and worked 28 years as a college official in five NCAA Division I conferences; two NAIA national championship games in 1987 and 1988.  He was also on the NBA staff from 1977 to 1979 and held commissioner and assignor positions in Southern California and Hawaii.

George Gusman: Since 1974, George became one of the most decorated football officials of the modern era. From 1975 to 1987, he worked 12 OIA championship games and six Oahu Prep Bowls. He also stared officiating college football in 1986 working the Hula Bowl and then moved to Division I conferences in 1988 (WAC) to 2007 (Big 12/Mountain West). He has worked more than 25 bowl games and an unprecedented two National Championship games (2012, 2015).

David “Koko” Mahukona: Mahukona was a pioneer in early and modern Hawaii basketball officiating. He was among the first to officiate major college basketball in Hawaii and along with 2018 HOF inductee Jimmy Aiona, helped lead and mentored many officials for more than 60 years. He served as a supervisor of officials and co-founded high school associations and the NCAA Summer League.
​
Herbert Minn: A boxer, coach, mentor and official, Herbert Minn was among the most influential figures in Hawaii boxing. He won two Golden Gloves championships, six Territorial championship and served as the boxing coach for the University of Hawaii from 1949 to 1958. As boxing referee, he worked more than 40 world title bouts in the World Boxing Association, International Boxing Federation and the World Boxing Council.

Wayne Ohashi: A former wrestling coach, Wayne Ohashi co-founded the Hawaii Wrestling Officials Association when the OIA and ILH wanted to improve the level of officiating. He instituted a vigorous training program and took an active role on Maui and Hawaii Island as well. For 26 years, he was one of the main influencers in the quality of officiating serving as the first president, the NFHS wrestling rules committee and the HHSAA wrestling coordinator.

Joe Ornellas: For more than 40 years he was an influential member of the Hawaii Football Officials Association serving as president for many years and active in all levels from Pop Warner to high school. He was selected as the referee in the first Oahu Prep Bowl in 1973 and worked the many University of Hawaii home games in the 60s and 70s. He was hired by the Western Athletic Conference in 1979 and worked 16 years as a referee, umpire and back judge.

Herbert Paleka, Jr.: Born and raised on Molokai, Herbert Paleka, Jr. was a three-sport athlete at Molokai High School. In 1967, he began his officiating career on Oahu working Police Activities League and various youth baseball games. His career quickly took off when he was recruited to work the Hawaii Major Leagues. He also began working softball from 1971 and rose to leadership positions for the Hawaii ASA. In 1991, he became the first softball umpire from Hawaii to be inducted into the International Softball Federation for slow pitch softball – the highest honor for umpires.

(June 20, 2018) HONOLULU - The Hawaii Sports Officials Hall of Fame today announced the first list of inductees to their Hall of Fame. The list includes:


The eight inductees were selected based on the criteria of demonstrating the highest level of achievement, character, leadership, skill and commitment-to-officiating over a significant period of time.

Each inductee will be formally inducted at the annual recognition banquet on Sunday, September 9, 5 p.m. at the Ala Moana Hotel.  For banquet information, please call (808) 445-4277 or visit our web site at www.hawaiisportsofficialshalloffame.org.

More about the inductees:
Jimmy Aiona:  Innovator and pioneer among basketball officials in Hawaii. Officiated high school, college, semi-pro and military teams in the 1950s and 60s. Began training officials in the 1960s and served as both high school and University of Hawaii assignor. Created many of the rules in use today including alternating possession and the advantage/disadvantage philosophy.

Roy Chong: Served as the first OIA football commissioner appointed in 1967 until his death in 1999. Provided training to all new and veteran officials and assigned games including the Prep Bowl in 1973. Well respected by coaches and officials, Chong mentored many of today’s top college officials

Earl Galdeira: The dean of Hawaii football officials. Worked 25 consecutive Hula Bowls as part of the officiating crew. Became the first Hawaii official to work a mainland post-season game (East-West Shrine game) as well as the Japan Bowl. He was named to the National Football Foundation College Hall of Fame in 1996.

Leilani Okuda: An umpire since the age of 15, Leilani was the first from Hawaii to be a certified International softball fast pitch umpire in 1996 and culminated her career as an umpire in the 2004 Olympic Games in Athens, Greece.  Coaches agree she is the best softball official in Hawaii and through her 25-year career, she served as a mentor and counselor of many future umpires.

Patrick Tanibe: The most famous and decorated basketball official in the modern era. Was one of the first Hawaii officials to be selected to work in a Division I conference (Western Athletic) and received prestigious assignments including The Maui Invitational, Rainbow Classic and the Chaminade upset of Virginia in 1982. He officiated the NAIA National Championship tournament for 3 years and founded Hawaii NCAA summer basketball league to develop and train young officials.

Ray Verdonck: Considered among the officiating leaders in high school wrestling. During his 36-year career in wrestling, Ray has served in nearly every capacity in officiating, administration and mentoring. Honored by both the Oahu Interscholastic Association and the National Federation of State High School Associations for his role in officiating. He has continued to mentor officials for the past 20 years.

Frank White: One of a handful of officials to succeed on the high school, college and professional levels. Following 15 years of high school officiating, Frank worked the next 24 years as Division I football official in the Western Athletic Conference. He also worked six seasons in the professional ranks in Arena2 football culminated by being named the referee in the af2 championship game in 2004.

Hide Yamashita: Unprecedented service as an umpire working over 75 years from youth softball in 1934 to high school and University of Hawaii baseball games. After “retiring” from college baseball in 1989, he continued to work both high school baseball and various softball leagues until 2010 when he retired at age 92.  Never saying no to a baseball or softball assignment, Hide served as an umpire when major league teams passed through Hawaii.  Despite his small stature, considered one of the giants in humanity and humbleness on the diamond.