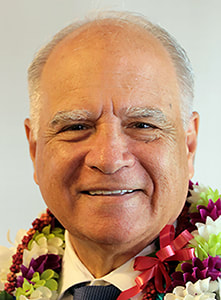 Joseph Edward Cardoza
Judge Joseph Cardoza began officiating football in 1977 when working as a young attorney in the Maui County Prosecutor’s office. He became friends with a Maui Police Department officer
“Cha-cha” Kealoha who recruited Joe into the Maui Football Officials Association.
Being a dedicated student of the game, it wasn’t long before Joe was assigned to high school
junior varsity and varsity games. His first varsity game was during the 1977 season when he worked as back judge. An offensive center in that game, Mike Simonds, a current prominent Maui official, remembers Joe’s friendly yet firm presence on the field. Joe’s calm attitude kept the game flowing smoothly with participants focused on playing the game.
Other memorable games during Joe’s early years included the junior varsity championship game in 1977 and several years later, a 4-OT game for the MIL varsity championship that featured future UH running back, Danny Crowell. As the seasons progressed, Joe worked primarily as a referee and over time became the senior referee in the MIL,
gaining notice and respect of his fellow officials around the state. He worked many MIL and Neighbor Island championship games and the first five years of the HHSAA football championship playoffs including a memorable Kahuku vs Saint Louis championship game.
Joe worked as an official in several NCAA games in the WAC and officiated Hula Bowl games from 1998 to 2005 with his fellow officials Earl Galdera, Joe Ornellas, Frank White, Hardy Spoehr, Phil Akana, Lloyd Hisaka, Mike Periera, Jim Blackwood and Joe Balangitao, current MIL Executive Director.
Joe is past president of the Maui Football Officials Association and in 2018 he was honored at the Maui Interscholastic League’s First Annual Official’s Symposium where he was the featured speaker.
Joe has had a long and distinguished career in the legal profession, serving since 2012 as Chief Judge, Second Circuit, State of Hawaii.
In 2018 he was honored as State of Hawaii Jurist of the Year and in 2019 received the Golden Gavel Award from the Hawaii State Bar
Association. 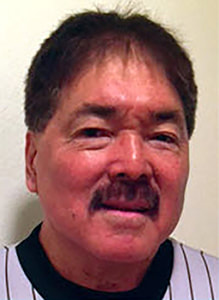 Stan Ono
When Stan Ono’s daughter decided to wrestle for Mililani High School, she asked her dad, who had coached wrestling, to help train her to help her make the team. While watching her wrestle, he noticed there was a shortage of wrestling officials so he decided to give officiating a try, while keeping an eye on his daughter. This was the beginning a long and illustrious career as a wrestling official.
Stan has officiated 15 years at the youth and 22 years at the high school level. From 2002 to 2005, he served as Treasurer of the Hawaii Wrestling Officials Association (HWOA). In 2005, he was elected president and continues in that position today. This association provides officials for youth and high school wrestling throughout the year. Stan has been the OIA Wrestling Commissioner since 2005 and State Rules Interpreter since 2013.
Stan led the effort to train and mentor high school wrestlers to officiate youth level matches and train new officials to officiate high school matches. His leadership led to the merging of officials on all islands into one association.
He was instrumental in the development of an evaluation program for selection of statewide officials to work the state tournament.
For the past 15 years he has chaired the HWOA Scholarship Tournament. This event awards scholarships to student managers and scorekeepers up to $1,500 each. HWOA has given out over $10,000.
Other special awards and honors Stan has earned: 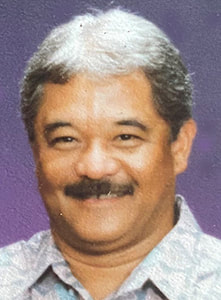 Creighton "Fuzzy" Richards
Creighton “Fuzzy” Richards committed more than half of his life to basketball. He started in the sport as a player and later became a coach, official, mentor, scheduler and Commissioner of the Hawaii Basketball Officials Association (HBOA).
Being the son-in-law of the great, James “Jimmy” Aiona, it was normal to be so involved in the sport. In the mid 1960s, Jimmy created HBOA and Fuzzy was alongside dedicating hours to improve the game and the officiating. Perhaps the most notable opportunity was the creation of the Aloha State Invitational League, an off-season league that gained notoriety because it involved selected high school, current and former collegiate and professional players. The league gave local players a chance to improve their skills. More importantly, the games provided an opportunity for the officials to improve their mechanics, positioning on the court, whistle blowing and the introduction of “innovative” changes to the rules of the game.
As basketball season spanned about five months out of the year. weekends were dedicated to officiating as many as five games on Saturday followed with debriefing and preparation for the upcoming week on  Sunday. It was important to Fuzzy that everyone understood what was going on. He held the officials to a high standard and expected them to conduct themselves with professionalism and integrity.
Despite the technical side of the game, perhaps what Fuzzy will most be remembered for was his dedication as a mentor. He spent a lot of time talking to players on the court. Whether it be tips to improve their skills, helping them relax or pushing them to move faster and stronger, Fuzzy was the one. He also spoke with coaches and offered insight to help their team. His enthusiasm was obvious. Everyone could see it on his face, with his warm smile and the hop in his step. Teams really looked forward to playing games when Fuzzy was officiating. He allowed the players to play ball and called the games fairly, according to the rules. Coaches selected Fuzzy to officiate their championship games because of this.
Richards passed away in 2012 at the age of 74. 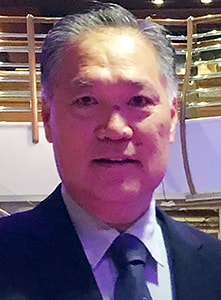 Gary M. Shiraishi
Beginning in 1986 and throughout his 28-year career as a softball umpire, Gary Shiraishi was respected from local to national level competition due to his professionalism,  dignified
demeanor and ability to “get the call right.”
For 18 years Gary officiated women’s collegiate softball, working NCAA games in Division I,
Division II as well as NAIA. Nationally, the Men’s Slow Pitch Industrial League and Super Slow Pitch, featured on ESPN, are recognized as the highest level of competition in the men’s slow pitch game. Among Gary’s career highlights are his selection to the Super Slow Pitch
Nationals for three consecutive years (2001-03). In each of those years, Gary earned the top assignment and highest honor of the tournament as home plate umpire, the only ASA-USA softball umpire to accomplish that feat.
Gary has umpired softball for ASA Girl’s Fast Pitch, ILH, HHSAA and, Hawaii State Games – Fast Pitch and Slow Pitch, Hawaii Amateur Softball Association State Tournaments at all divisions.
In addition his outstanding career as a softball umpire, Gary has taken on many leadership roles within the various local umpire associations. He was president and assigner for the Honolulu Umpire Association,  and Assigner for the ILH, HHSAA Tournament, Hawaii State Amateur Softball Association, Hawaii Collegiate Softball assigner, rules clinician for Hawaii USA-ASA Softball Umpire Associations, ASA National Umpire School Clinician and USA Cup-Hawaii umpire and assigner.
Gary was recognized as ASA Medal Program Gold Level Umpire in 1993, ASA National Indictor Fraternity Inductee in 1996 and ASA-USA Softball Elite Umpire in 2003.
A teacher first, Gary devoted much of his time to evaluating, nurturing and developing many novice umpires who went on to officiate higher levels of play. His leadership played a crucial role in the early 2000s in efforts to maintain and develop quality umpires to meet the demands of the ever-growing sport of softball. 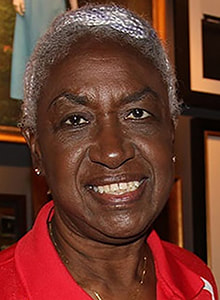 Verneda Thomas
Verneda Thomas was born and raised in Chicago and grew up playing sports with  success at a very high level.
She was a high jumper at the 1956 Pan Am Games and AAU National Champion in 1957, and also appeared on the Ed Sullivan Show.
She graduated from Graceland University where she was inducted into the Athletic Hall of Fame in 1973. She was coached in Chicago by the late Donnis Thompson, UH Women’s Athletic Director. She excelled as a volleyball player and played for the US in the 1964 Tokyo Olympic Games, the first Olympics to include volleyball.
She moved to Hawaii to work at Queen’s Medical Center as a research associate and surgical technician until her retirement in 1996.
Verneda began her officiating career in the mid-1970s working all levels of volleyball; high school, collegiate - from NAIA to NCAA Division I, USVBA and USA Volleyball – Novice to Open.
She attained her USA Volleyball National Referee certification in 1982 and officiated volleyball for nearly 40 years. She retired as USA Volleyball National Referee and FIVB International Qualified Scorer before retiring at the end of the 2012-13 season.
Verneda served as the Official’s Chairperson for USA Volleyball – Aloha Region, as an officer in the Aloha Region and she was an instructor and clinician at all levels.
In 2007 Verneda received the USVBA Glen G. Davies Referee Service Award, recognizing active USA National referees for outstanding
contributions to the USA Volleyball referee’s development and certification program. Qualifications for this award require a minimum of five years certification as a USA National Referee, at least three years as a major contributor to the referee program in her Regional Volleyball Association and actively working as a referee at a minimum of 5 United States Championships over a period of 5 years.
Verneda passed away in 2016. 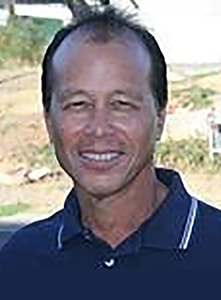 Michael A. Wong
Michael Wong has spent most of his adult life serving the soccer-officiating community.
He was the American Youth Soccer Association’s (AYSO) Commissioner for the Kailua
Region, 1983-85, where he was responsible for scheduling local recreational soccer games along with training coaches and officials.
He began, officiating soccer in 1989, with youth leagues and quickly moving up to work high school games. In 1993 he was named United States Soccer Federation’s (USSF) State
Referee Administrator for Hawaii, responsible for the administration of the USSF Referee Program in Hawaii, serving until 2003.
Between 1994 and 1997, Michael was referee assigner and one of Hawaii’s referees for the United States International Soccer League’s Pro Division games in Hawaii, which included Hawaii’s pro team, the Hawaii Tsunami.
In 2003, Mike became USSF’s State Coordinator in Hawaii where he was responsible for training, directing and coordinating all USSF soccer referee assignments throughout Hawaii, serving in this position until 2019.
An active NCAA official, Mike was the first soccer referee in Hawaii to certify as a National Referee with the National Intercollegiate Soccer Officials Association in 1998. In 2004 he was selected to the crew for one of only two NCAA Division I post-season games played in Hawaii. From 1996 to 2019, he served as Hawaii’s NISOA Chapter Representative, responsible for training and assigning soccer referees for local collegiate matches which included Division I, University of Hawaii and Division II teams in the Pac-West Conference.
In 2004 he founded the Koolau Soccer Referee Association, the only organization in Hawaii dedicated to providing training and fellowship for soccer referees at all levels. Mike is the 2012 Winner of the Koolau Soccer Referee Association Isaac Veal Award, given annually to the referee within the Hawaii soccer community in recognition of that referee’s contribution to the game during the previous year.
google-site-verification=E3AWpZ0L83yiNYZkKQNdTnV7Jon28zP9nTLkTxKgYtc