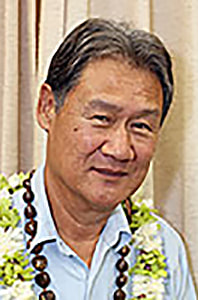 Hubert P. Minn
Hubert Minn graduated from ‘Iolani High School and received degrees from both Cal State
Northridge and the University of Hawaii, leading to a career as an educator in the Hawaii
Department of Education where, in 2002, he received the Cliff Bailey Quality Award as an
“Outstanding Teacher.”
He followed his father, Herbert, a 2019 Hawaii Sports Officials Hall of Fame Inductee, into the
sport of boxing where he began judging amateur bouts in the early 1990s, and by 1997 became a
professional judge with the Hawaii State Boxing Commission. With his father’s encouragement, Minn eventually became affiliated with the World Boxing Council and soon after began judging world title fights. He even had the opportunity to officiate several fights with his father. To date, Minn has judged more than 55 world title fights including the 2017 “Fight of the Year.”
For 20 years, Minn has served as chairman of ring officials for the World Boxing Council. He was also honored with the 2005 Indonesian Physicians Professional Sports Award, was 2006 World Boxing Council Committee Chairperson of the Year and World Boxing Council 2019 Committee Chairman of the Year, an honor accepted on behalf of all WBC ring officials.
When asked what traits make a successful boxing judge, Minn responds with: “Integrity, intelligence, commitment and courage.” He adds that having a thick skin helps as, at some point in every official’s career, he or she will be the target of criticism from fans and the media.
In 1999, he created one of the most comprehensive training seminars for ring officials and has continually been considered one of the best trainers for ring officials, as well as certifying officials each year throughout the world for the World Boxing Council. He has presented at training seminars throughout the world and he is currently developing computer-based training modules for boxing officials from novice to world championship level.
Despite all his accomplishments as an educator and boxing official, Minn insists that his greatest accomplishment is raising his two children, Shanti and Vail, and keeping the family name honorable. 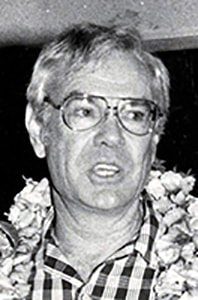 Gordon Scruton
Gordon Scruton officiated and administered the sport of track & field in Hawaii for seven decades.
He started officiating in 1954 while a student at the University of Hawaii and continued on the continent until 2015.
Scruton, who was born in Hilo, was the certification chair for officials and he trained and mentored
many officials in annual clinics on Oahu, Maui and the Big Island. The Punahou product served as
youth coach in Kailua and youth chair of the Hawaii Association of USA Track & Field, enabling many youth athletes to compete in Hawaii and the National Junior Olympics.
Scruton’s love of track & field took him across the globe to see the 1976 Olympics in Montreal and attend all the World Track & Field Championships from 1983 in Helsinki, Finland, to 2011 in Daegu, Korea.
His many accomplishments and accolades include:Scruton passed away in November 2015. 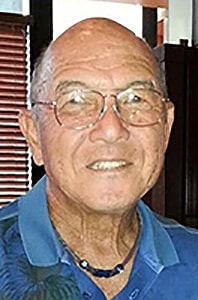 Arnold S. Soma
Arnold Soma’s first experience with umpiring came when he was asked to umpire a championship game for the Ewa Beach Little League. The umpire did not show up, and at the last minute, Soma, who had never umpired before, was up to the challenge. As a former catcher in his playing days, he at least he knew the strike zone. That was his first exposure as an umpire, and for the next four years, he volunteered for the Ewa Beach Little League as an umpire when needed.
When his son got to high school, Soma gave up coaching and playing baseball but still wanted to be involved. After one of his games, he asked the umpire, Hawaii Sports Officials Hall of Famer Hide Yamashita, about umpiring. He was told to contact Marty Martin, who was the leader of the Oahu Umpire Group (later known as the Rainbow Umpire Association). Martin welcomed Soma into the group and a long and distinguished umpiring career would follow.
Soma umpired five years as a volunteer for Little League Baseball, 10 years for Babe Ruth and 20 years for American Legion. He umpired OIA and ILH high school baseball and worked University of Hawaii games for 20 years.
With the retirement of Martin as leader of the Rainbow Umpires Association, Soma managed assignments of umpires including the
Honolulu and Rural AJA League, American Legion, Babe Ruth, ILH and the Hawaii High School Athletic Association State Tournament.
Soma was selected to work as the plate umpire in many championship games at each level. He worked the plate in the first and third
championship games during Mid-Pacific’s run of three consecutive titles. He also worked the plate in the championship game for the 1982 WAC tournament held at Les Murakami Stadium.
Soma has said, “One of the greatest rewards of umpiring was being able to meet college coaches and talk to them about the game of baseball and their players,” and he considers meeting coaches and players at all levels, like Dunn Marumaru of MPI, Lance Kiyabu of Moanalua and others, who have become lifelong friends, as a lifelong benefit of officiating.
He said of his umpiring career, “I love Baseball.”